Two weeks ago, my family came together for an advocacy event coordinated by incredible friends and family in our old hometown, Grand Junction Colorado. The function was a success and took a lot of hard work by people who cared and put in major time and heart behind the scenes. My sisters friends Avery and Jordana, Jordana’s dad Harry (awesome dad name) and my Uncle Mike who was under the impression that months earlier he’d retired (Nope!) Besides them many more came together, helped fund, offered services, and sponsored the event in order to make it happen. As for me, I sort of just had to show up.

Beyond friends and family that put in the effort to sort out logistics doing an incredible job, the article in our local paper impressed me majorly–not just with it’s advertising of the event, but by publishing a full page color spread, covering our families stories respectively and including a digestible narrative about the reality of MECFS and giving it a wider context. I felt happy and surprised to read this article right out of my humble hometown, when such a surprising amount of press from noteworthy and “big league” media can completely miss the mark. 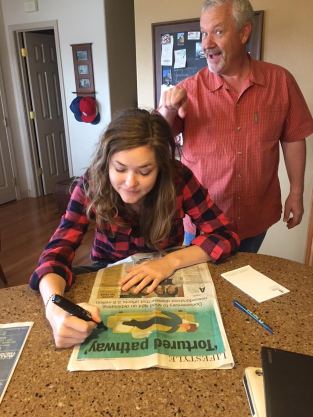 Autographs for Uncle Mike bc I have No $ For Him

The dense, nearly unbelievable history mixed with present political roadblocks and numerous scandals all under the M.E. umbrella make the disease particularly hard to write about and convey in one article without writing a novel. Not to mention the personal, human interest side of this, and the toll it takes on patients and families. Very few articles contain both, and many more are simply clumsy, neglecting essential facts or even accurate data. Due to our general lacking presence in the media, I know someone might think “Well any press is good press, right?” But I struggle with that adage. When you’re fighting a thirty year old false narrative, not all press is good. In fact it can easily be bad by perpetuating fallacies, inaccuracies or misconstrued data, and even celebrate studies (like the PACE Trial) or treatments which have done the MECFS community incalculable harm.

So I guess, no, not all of it’s good. Too often I’m excited to see press about MECFS only to be disappointed beginning just the title, which will call the disease “chronic fatigue” or in the first line, inaccurately label the number one symptom as tiredness. *facepalm* But I digress, I didn’t mean for this to get into the media missing the mark, or the missing media in general, because today is about advocacy. And when people with this disease, their caregivers and loved ones, researchers and doctors are out there fighting for it, none of them will get it wrong. All of them know the numbers, the history, the truth, and the unfortunate personal toll.

The event in Colorado was a success. And maybe I’m a romantic and would call it that if even 3 people showed up, because that’d be 3 more people who were aware of something that is so rarely seen, heard, talked about, or understood. But many more showed up, family and friends we hadn’t seen in decades, strangers too, all to learn about a disease on a Sunday night, when it would be so so so easy to stay home and just forget it. It’s hard to express the humility and gratitude you feel seeing people show up, tell you they’re thinking or praying for you or your family, or even a stranger offering his hope and encouragement for the future. It all meant a lot, really. So THANK YOU again and again.

After the screening of Unrest, the 3 of us (my mom sister and I) spoke and were followed by Linda Tenanbaum, the CEO of the Open Medicine Foundation and human firecracker, who infused hope back into the audience, who were probably mostly thinking Dang, this is a shitty situation. Shituation?  She closed out the night before it was on to the reception. The firecracker (Linda) is an amazing speaker and doer, and having her attend the event only amped it up. Getting filled in on the OMF’s work and most up to date findings was a truly optimistic breath of fresh air.

The OMF is at the forefront of research and work purely off donations, as in every cent goes into the science. All participants–brilliant researchers, doctors, scientists and logistical coordinators work on their own dime. Why? Some of them have a child or loved one with this disease, others just a determination to find answers to something with so few. Due to the explicit lack of urgency in the government when it came to MECFS interest, when submitted applications for funding biomedical research were repeatedly turned down by the NIH, these guys got together and decided it was time to do the work themselves. And thanks to the generous donations of so many people, they’ve been able to achieve and find incredible things. There is still a lot to do and this kind of science will require a lot of GREEN. But hey, maybe the #MillionsMissing protestors out there today in the streets will help change studying a disease with public charity to adequate funding provided by the Agency whose job it is to fund.

When we attended another event much like this one in California in October, it took me roughly 30 days to recover. I know because I videotaped myself everyday for a month to track how each day went after we returned. It’s a long trip and these events, while incredible and worthwhile, take a toll. The socializing alone is just like physical exertion, and the event in GJ lasted roughly 6 hours. While I’ve recently undergone an upswing in my health, I watched my mom that night—speaking and catching up with many old friends. Sitting as much as possible, not having even one glass of wine or “playing with fire” by any stretch of the imagination. She played it safe and did what she could to pace herself. You’d never guess anything might be wrong by looking at a photo from that night.

Yet at 6 AM the next morning, I woke up on the couch just in time to see her collapsing, my stepdad with his arms outstretched underneath hers, catching her as she slowly went down, muscles twitching and trying not to pass out. She’d woken with a crushing migraine and often if she doesn’t take her medicine in time, some epic vomiting is soon to follow. She’d taken the meds but sometimes the migraine wins and all you can do is endure it until it’s had its way with you. She’d run to the first bathroom feeling her mouth start to water and knowing what was to follow, but my brother had just moments earlier gone in to shower before his early fight home. (Way to go NICK)

So she was on a quick race to the bathroom on the other side of the house, but midway through started to black out, and was luckily caught by my stepdad from behind while her muscles seem to go limp and the room blurred in and out. I can’t remember what was said but I knew she was going to spew quickly and ran as fast as I could for a bowl. I made it back just in time, with a casserole dish, which isn’t the best of bowls to puke in if we’re getting technical, but hey, better than the carpet.

After a nice little vomit session on the floor, we both pulled her up to the chair where we put ice on her neck and wrapped her feet in heat packs to try to get the blood to flow downward. She sat with her eyes closed, as though she were concentrating hard on something. But when you’ve experienced that kind of pain, you know just what it looks like, and that was it. She waited and Marc sat nearby for anything she might need. After an hour she was finally able to walk back to the bed and eventually get back to sleep. So, that was her morning.

And from what? From doing what healthy people do all the time. Watching a movie, catching up with friends, eating, hanging out. This is what put her over her envelope. Watching her I just kept thinking about the invisibility of it all. That no one would guess the woman they were with last night was in the extremely painful and scary position she was in now. But this is the story MECFS and those who suffer with it live it all the time. You see us when we’re well enough to be seen. Otherwise most of the suffering goes on behind closed doors, and no one presumes otherwise.

Today is #MECFS Awareness Day, and thousands of people around the world are taking part in the #MillionsMissing protest thanks to MEAction and many more. I wish I were one of them but I just couldn’t make it happen. So I made my sign with shoes attached on behalf of the three of us in the family to represent. It was only a tweet, but it was the best I could do. 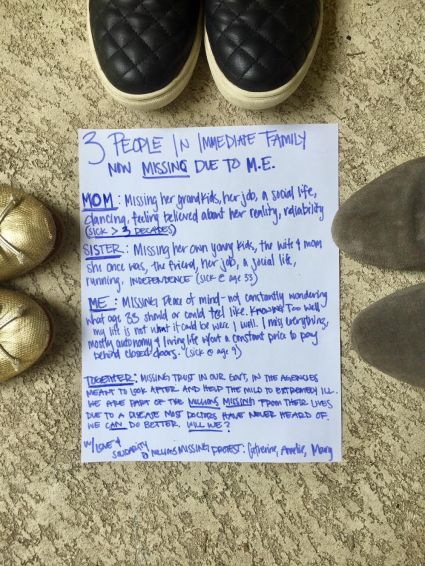 I hope anyone reading this who participated in the #MillionsMissing event knows the immense gratitude and unity from millions of us who couldn’t physically be there. This kind of advocacy isn’t easy, particularly on those who have the disease. They will all pay for it in terms of their health in big and small ways. And yet it’s what must be done in order to make the invisible seen, give the silenced a voice, and the truth a solid platform on which to land. My gratitude runs so deep to all those who organized to make THIS happen, and you know as well as I do, it doesn’t end here. We’ll fight even if we’re left beat up until things change the way they’ve needed to for decades. Hang tough, all of you. The Gelpi’s are with you in spirit. Thank you for your bravery, for caring, and for risking your own health so that we might all have a chance at actual health in the future. Thank you, in every language ;)

Health, Happiness, In Solidarity–Happy May 12th