For nearly  a month now, I’ve been writing a blog that would normally take me a few 3-4 hours to write and a few days to edit, if I were in “regular” enough health and other things were ordinary. I catch myself in a strange predicament, so I’ve abandoned that last post, which may have been THE BEST THING YOU EVER READ because I can’t damn well get more than a paragraph written on a good day, and the editing has become arduous for numerous reasons outside the one I’m about to describe, but to the point where writing, my one constant among chaos has taken a further hit. And since I’ve learned, for me, writing a simple status of things in my own life is easier than trying to put some thesis about technology together (one day) I’ll just bring you up to speed, because I’m not sure how long it will be like this.

If you read in my past blog, you saw I’ve been fighting some switcht that seemed to turn on a charged degree of restless body syndrome and skin crawling, which have been part of my symptoms for years. With a switch of pain medicine that didn’t seem to improve anything and cause the hugely uncomfortable side effect of skin crawling and an insatiable necessity to move my limbs ,Unfortunately, when we stopped the medicine and returned to the regular regimen, for some reason, the RLS (or restless body syndrome + skin crawling) did not, which turned up a conundrum.

We’ve yet been unable to find out what “fliped the switch” that made these symptoms turn on with the cherry on top of skin crawling, and why stopping the med that seemingly caused it to start wouldn’t naturally cause it to turn off. If anything the symptom has stayed the same and many, many restless days and nights become worse, and well, hellish. Waking up to squirming legs and little charges running through your body with your skin crawling on top, Is Foldiers in your cup! Kidding, its awful. I think I’d prefer pain. And since the pain has continued, now I get both, yeah! But if i had to pick between the two, I’d choose pain. It’s discomfort is different from that of squirming limbs, electrical bolts and your skin feeling like the audio equivalent of nails on a chalkboard, if that makes any sense. Besides all that, for whatever reason, the medicine I’ve been taking for nearly a decade that has controlled the symptoms 90% of the time, seemed to just suddenly stop being effective. It’s as if this clinically same symptom is originating or set off by something else in the body, and that has rendered my old meds useless.

Where I am lucky, is that we found a medication that has been effective in controlling these symptoms, which truly, at times, feel more tortuous than pain. Where I’m a little unfortunate is that the medicine which calms down the lightning/snow/hail storm going on inside me, is the same medicine I’ve been taking for sleep for the last 2.5 years. At night it has done me wonders, since for years, even with the help of a sleep aid, I rarely made it through a full night a of sleep, saw a lot of sunrises, and often had tangible nightmares and at times became trapped in night terrors. (NO fun) Luckily this RX has not only worked best for my quality of sleep out of all the meds I’ve tried in the last decade, but it also seemed to reduce my nightmares, or at least made me sleep so well, I don’t remember them, which is, you know, fine by me. The obvious problem is that when you’re taking a pill so incredibly effective at helping you sleep, but you’re now taking it at 10 AM…you’re going to run into some issues. Like, um, what’s that word? Functioning, that’s right, you’re going to have problems functioning in daylinght. But without the meds, life is even less functional with misery stirred in. I wish I could say I were stronger and I could do it without the meds, but believe me, when you feel like you’re being tickled from the inside of your skin and your legs wanna kick and squirm and flex outta control when you just want to sit or lay and some strange shock or charge is making its way from head to toe frequently, it’s just not doable. You’re fighting the whole day.

So, I went from misery and fighting, to z o m b I f i e d and tired and unbalanced (pysically) because that’s some of the med’s effects, which I”ll add, are HUGELY more tolerable than life without them. But, taking a sleep med during daylight, as I’ve explained, is draining me. I move slower than before. My cognitive ability feels like it’s being run by a fat hamster with heart disease. I can feel the effects that I know are from the meds, but it takes just the thought of one morning in January to make the “pick your poison” choice easy.

At a bitterly coincidental time, I was told to ween off that pill by my doctor because the FDA had been coming down hard on physisicians and who they prescribe to and how many doctors are prescribing to one patient could compromise their license. Sweet. I’d have to wait to find another doctor to prescribe it before I could refill it (I’ll write more when I’m not so z o m b i f i e d)  I found myself stuck between a few pills left and a hard place. The only thing relieving me from the misery was this med, but because of new regulations, only certain doctors were allowed or were choosing to prescribe it out of caution. I was prescribed some other conventional prescriptions to control RLS (Miripex, Bacloven and others) which did nothing, and my Lyrica and then Gabapentin had for whatever reason ceased to worked. Now I was stuck.

I tried to talk myself into the belief that slowly weening off the Central Nervous Depressant and changing to the Bacloven that I could rid myself of this new, annoying, persisting symptom if I just believed hard enough the new meds would. But by the time I had taken the last pill and it was all up to the bacloven, I went 1.5 days and did what I guess we could call, ” possibly acceptable” but not at all “controlled” on the symtome scale. The morning I woke when I knew the last of the weening med had left my body, I was in hell. Really. I thought if I couldn’t get rid of this feeling, which was the truly inescapable task of needing to crawl out of your skin and also throwing all your limps off, I could see how and why people ended it. I know, that sounds extremely dark, because it is. But when you’re in that much extreme discomfort, you finally see why people could have it in them to do something that seems so far away and impossible in your own world. I wasn’t in hell, I had help and luckily one doctor to prescribe a partial dose until my appointment with the neurologist. Saved.

But that morning for those hours where I tried everything I could think of and could not find relief, I thought of the many who came before me and those now who experience similar symptoms to a much higher degree and do not have the safety net of their health systems or family to fight for them and find them relief of their pain or quell their discomfort. This letter from a past advocate, one I never knew until I read her letter, who experienced unspeakable greater pain and hell than I did, and lacked the help of her countries support of MECFS more or maybe as much as the US had me thinking how in fact fortunate I was. At the least, I had a family that would step in and demand or find a solution I wouldn’ve have been capable of myself.

Another thing stuck with me. When leaving one of my 14,000 doctors, one who is actually very good and informed particularly in the filed of dysnautonomia (a huge aspect of ME/CFS for most) he said something. “You need to be getting as ltitle medicine as possible from as few doctors as possible, otherwise, you and I will be flagged.” I felt such anger on that ride home. This is where so many MECFS patients are stuck. It’s suspicious of us to have too many doctors all prescribing different meds, and yet, there’s no one doctor for us to go….This disease multi-systemic, and most patients, if they can make it there, have at least 5 different doctors monitoring different parts of their malfucntionng bodies. How on earth would we break this puzzle without research and education to show these medical entities the truth about a disease it simply does not undestand, and who some are plainwright just choosing not to look at.

I always try to take as little of the meds as I can because I know they will wipe me, which would make a lot of people, then find a way to withstand it or another solution. We’ve tried magnesium, checked iron levels, yes I have lyme disease, I take multiple supplements and I’m pretty sure I can’t The Shape of Water-it and just live in a bathtub for eternity, so for the time, this is my limited option to escape the suffering of this strange, insidious symptom that we just can’t figure out. Last month I saw Dr. Klimas, (my hero!) who is running a whole scope of tests, and all our fingers are crossed that we may find answers.  Not everyday is spent zombified, but my mom recently told me she was worried because every time she came over I sounded like a zombie and not myself and I said “maybe that’s just cause you come over at zombie hour” and she said that couldn’t be ruled out. But we both knew.

So, I try to get rid of the guilt that there is so much more I could be doing but that I am held back by from the very medicine that makes life bearable, but that can also make it very a slow moving, zombie-esque and unproductive experience. We can only do what we can do. When you’re already fighting “fatigue” (a really shitty word to describe a symptom of a really shittily named “chronic fatigue syndrome”, hmmm) a med like this is like 4,000 cherries on top. I definitely believe that either my body will very slowly adjust from whatever through it out of whack in October, or that I actually will be able to ween from these meds and get back to the thing I love more often—writing, advocating, and creating.

And by the way, check this out! If you live in Colorado, please come to this advocacy event; it’ll be a good time with a good cause. The Gelpi’s will be there, Grandma Bell (you’ll know soon enough) and lots of others. Not Monty, sorry to disappoint 90% of readers :( 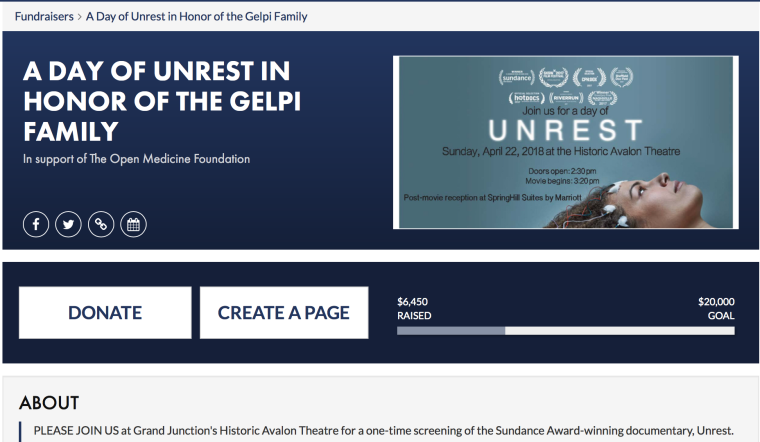 Read more here about the event. And read more HERE for the write-up on our stories in The Daily Sentinel. Thank you Anne Wright for the article and for everyone who has helped make this event possible, which has been many, but especially Jordanna, (her dad) and my Uncle Mike who thought he was retired. Haha, sucker! Love ya.

Health, Happiness, Keep On Zombie-ing On