This all feels like some cosmic joke as I write this, but the sh*t show must go on. I wrote this piece intending to pay homage to the last month, which has marked an unexpected bump in my functionality. All due to a small but sufficient amount of useable energy I encountered, as if finding money in the street. Look energy! Pick it up!

For nine months, this invisible life force–something you almost can’t really know you have until you lose it–has eluded me. And then, subtly and seemingly out of nowhere, it flipped on inside me like a light switch.

For the last month I’ve been hard at work on an important story about the opioid crisis; the data driving it, the policy, and the affect it’s having on millions of chronic pain patients. I’ve felt compelled to write it and share a side of the narrative that’s gone missing from the national conversation. The point is, I felt functional enough to devote myself to this article in a serious way. Almost every day for two weeks week, I put on real pants and drove to the downtown coffee shop, the one with terrible art work on the walls and unforgivable price tags, where I’d work for hours at a time. Most of you know 2019 has been a garbage pail of health issues, not really allowing exertion like that on my part.

The joke is, I’m trying to write a piece on how great I’ve felt, in one domain anyway, and I am continuously interrupted by how terrible I feel due to one of the more severe migraine cycles I’ve had all year. Also the ice pack strapped around my head keeps dripping water in my eye. Just great.

Despite the newfound strength I came into, my physical symptoms persisted. Migraines, face pain, POTS, cystitis, the badder disaster–all alive and well. The catch? Having this new, albeit small and yes, limited, amount of energy on board has been a game changer in terms of dealing with all the pieces that go into life with chronic illness and pain.

Finally room opened up in my brain and body for a resilience to deal with the symptoms  proactively, or distract myself from them (insofar as possible), or just enjoy the rare freedom you feel when you finally have a choice in how you’ll spend even 1/3rd of your day.

The relief it’s brought has left me in tears of gratitude. Not a relief of pain, but of burden, of carrying this heavy, physical weight around for so long. And finally taking it off.

It feels almost impossible to convey how much more tolerable the experience became,  finally having some amount of energy inside to help take it all on. It’s still a difficult and daily battle, but when you suddenly don’t feel the active force of gravity working against your every move, well, that helps.

What doesn’t help? Falling down a flight of stairs at your cousin Kenny’s house, the night before his moms funeral. Wait maybe that’s the joke. You know, this story is just so Gelpi. 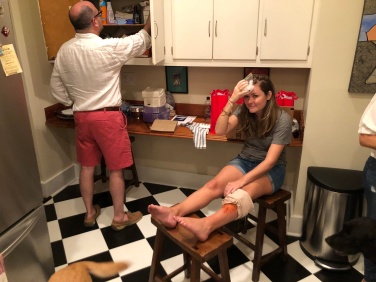 As you can see by his face

So, maybe my month of reliable energy has begun to wind down. I’ll go out on a limb and say that becoming entangled with an industrialized fan on the steep fall down the stairs and breaking that fan with my face at the bottom, did not help. I had grill marks on my face people! Like some piece of George Foreman meat! Good Lord.

The point in all this was to pay homage to feeling GOOD, and the things you get to do when you’re not stuck in a dark HOLE. And so it shall remain. I’ll tell the Tumble-Down-Kenny’s-Basement-Stairs story soon, I swear it. I’d never hide such comedy gold.

It doesn’t easily escape my mind how bad one day in August was, just two months ago. I couldn’t lift my arms above my head, the weakness and heaviness and dizziness were relentless. My entire head throbbed with pressure, and I felt a total desperation wrap itself around me, barely able to keep my eyes open laying on the couch. I feared the physical feeling of that day would never end. And then less than two months later, I end up here… 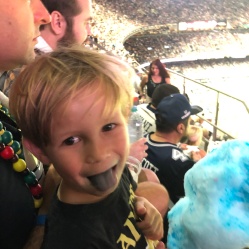 The Blue Demise of Miles… 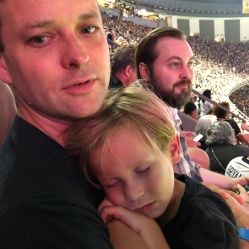 Attending a Saints game with family and friends, yelling in the Dome to throw the Cowboys offsides, and most importantly, enjoying the hell out of myself. How could such a transformation occur in such a short time?

I can’t know. I stopped taking one of my anti-vitals. My mom prayed a novena for me after an especially bad few weeks. I pray my Hail Mary’s every morning, waiting for my head to calm down. All I know is the very terrible day in August did end, and for a while at least, I’ve been gifted with enough energy to participate in my own life. I’ve paid a price for things, but at least I did something to pay for. Most of 2019 has felt like a constant hangover without a sip of alcohol.

I just want to remind anyone who’s sick and in a crash or experiencing a rough patch to hang on. I know how desperate and forgotten and isolated it feels. How insufferably long the time can take to pass. (Trust me, this is the first time in 9 months I’ve had some level of functionality) The truth is we just can’t know the future. But given a chance to play out, turning (inward) as a spectator to our lives when we can’t participate in it firsthand, it will usually reveal some incredible grain of truth that will make life sweeter, easier, and closer to whole. At the very least, it will make us hugely grateful for the tiniest of things–and it’s hard to be unhappy when you harness true gratitude from within.

So what does the letup of a nine-month crash finally allow for? Well, really dumb but fun stuff that makes me happy. Like a few weeks ago when I gave Monty a bath. We came inside and I brushed him while watching college football. I noticed the little pile of hair was becoming pretty dense and also that it seemed it could be arranged, as if I worked at it, I could shape it into a smaller, furry replica of Monty. So that’s what I did…

And YEAH, I’m proud of my work, mkay? It took some real finessing. As you can see, the first few editions were not quite right.

You can call this a waste of time and probably not be wrong. The thing is, when you’re feeling well enough to exert yourself in creative ways beyond just surviving, nothing feels like a waste. Things take on a new lightness and enjoyability. Even bathing the dog. Of course Monty was a wonderful and willing model. Speaking of which…

Monty’s good looks should have been earning us money ages ago. Thanks to the Aunt Becky scandal, I learned that “Instrgram Influencer” is a real thing and decided Monty needed to be one. We haven’t turned it into cash yet, but we do get a discount on merchandise from these brands that saw his picture and posted them on their pages. So yeah, we should be earning hundreds upon hundreds of dollars any day now.

Anyway, I’ve done more than make small, furry replicas of Monty and model him in bandanas. I finished The Snows of Kilimanjaro, which had me enamored for three days straight and I need more Hemingway to read. I’ve continued to work painfully slow on completing sudoku puzzles, as well do a lot of swimming because it’s October and 93 degrees and that’s just, you know, reality now.

In the end, yes, I fell down Cousin Kenny’s stairs. But you know, the fact that I was well enough to be at Kenny’s in the first place, and subsequently do acrobatics with a fan down his stairs–well, that says something. Something good, believe or not.

Here’s hoping the recovery isn’t so bad. I write this as much as a reminder to myself as to others, of how fleeting all this is. That idea used to frighten me, as though nothing were solid and reliable. But now I find it revealing of a truth that’s freeing, a relief. This was always temporary. Changes can come hard and fast, but looking with creative eyes and a depth of perception, we can often find that they’re in our favor. We have to stay awake though. Give life a chance to show you how things turn out. As the adage goes: In the end, it will all be OK. If it’s not OK then it’s not the end. Cheesy, yes, but I can be on board with the idea. So march on soldiers. As always, we will get there.

Health, Happiness, and the Bruise on my Thigh Has Given Me Three Butts. Three.