I never write on Sundays, but I have a little energy today and after a sick and cloudy week, I’m taking advantage of some mental clarity. The truth is I don’t have a lot of news physically. I have been the weakest I’ve been in my life. It’s a little nuts. It feels like trying to move through maple syrup. So life has been in slow motion, literally. But as always, I have help and constantly remind myself how lucky I am for it.

The real challenge with this latest crash has been maintaining emotional resilience. I remind myself of the same idea each time it gets overwhelming; this is only temporary. And when times are golden and everything is going perfectly, that will be only temporary too. The point is to find inner peace and joy that is resilient through circumstance. So just look at the bad times as intense training. Training isn’t forever. At some point you go out into the game and test your skills. And no doubt, the world will always provide you with situations in which to test yourself and what you’ve learned. This year has had a lot of training and a lot of tests, but a part me feels that I am only just beginning to understand any of it.

Since I have a lot of down time, not moving and all, I do a lot of weird things. Like look at nothing out of a window for a long period of time, not really knowing how long has passed when I snap back to present. Sometimes I listen to Debussey’s Claire de Lune over and over and over and just feel the aliveness of a song like that, even though I feel like only a half-alive body. I watch French movies on Fridays because verbally, it sounds nice. French Movie Fridays. Also I love French movies. I write down things in my notebook that I don’t immediately understand or know from where they come; sometimes I just feel like the person holding the pen, channeling something else altogether, something separate from me. Deepak Chopra would say there is no separate, there is no you and no me. Each person manifests the entire universe, all of the people, and the source itself, within themselves– thus separation is just a human illusion. This is why when you hurt someone else, you hurt yourself. This is the oneness found in “waking up.” This is how he explains the part of you that isn’t born and won’t die. It embodies it all, and it is eternal. So I guess some of the things I write down are being pulled from an all-access consciousness that has always existed. I don’t know. Maybe getting sick is what it would take for me to stop and pay attention, to finally write down dormant words, to know what it is to be alive. I just know sometimes I write things that are far more intelligent than I am and I don’t even feel right taking credit for them. Except the White Girls on Facebook post, that was me. :)

There’s a funny phenomena that happens when I’m sick: Once I start to feel better and recover, I can never remember how sick I was or how bad it felt. I can imagine it but I can’t feel it. It’s like my brain deletes the sense memory of it. I have read that this happens to women after childbirth, and I guess it’s an evolutionary survival mechanism. If women remembered how bad it hurt, they’d never have more babies! It’s like the worst hangover you’ve ever had. You swear you won’t do it again, but then the beer tastes so good and the buzz is so nice! I don’t know what the meaning is behind not being able to recall precisely the physical feelings, but being this weak and incapable feels pretty burned in my mind by now. I may not be able to access these feelings again once I’m better, but what I need to remember is that shit, life is fragile. One day you wake up and you’re too weak to walk and your mom and sister have to feed you. It’s not all pretty, but I know there is meaning in it. It’s easy to throw up your arms and scream WELL WOE IS ME,  life is unfair and none of this matters. And I’ve done that some days. The problem in doing this is that the very conclusion leaves your experience meaningless. The suffering is the hard part, but if you can hold on, if you learn to live anyway, then you’ve transcended the pain and evolved and it wasn’t for nothing; growth can never be bad. Following the pain always comes pleasure, even if it’s a simple change in perspective. Plenty of people have experienced far greater tragedies than me and come out on the other side– happy and wise. Like my mom for instance, who survived the death of two husbands, but didn’t succumb to darkness and managed to emerge happy and loving.

The goal in all of this for me is not just to stay positive and hopeful, but also to keep my perspective wide and my problems right-sized. This is just a moment in the context of eternity. It’s still really hard but it’s not forever and I’m not on my own. It’s easy to feel like the world is really big and you are really small and your little problems are terrible but that they don’t really matter. But they do, and you do. The way to make them matter most is to conquer them– with humility, grace, whatever you got. Everyone has their battles and each leads to their own lessons and outcomes, all necessary for the evolution of the world. But we all have to do our part. I don’t pretend to know how it all works, and I don’t think we’re meant to know the whole truth in this limited dimension we live in. That may explain why I had a dream last night that TRANSCENDED TIME AND SPACE and I have no idea how to put it into words. I probably sound like a kid during his first experience of dropping acid, but some things we just can’t fathom on earth. And that’s fine. We just need to do our best.

So I’m going to keep trying. Keep hanging on. Keep reading what the Greats have to say and try to make sense of it all. It’s been a challenge to stay optimistic and happy, but I know it’s necessary and I will work just as hard at that as getting better physically. In that light, I’ll introduce a new project that begins tomorrow. I’m going to report a few minutes of only good news every day for 30 days. I’ll begin with personal good news (like, I had enough energy to take a shower today!) then report national good news and then worldly good news. The idea is simple- I’m too young to be cynical. My situation is depressing enough and I don’t want to keep watching the news to see how crappy the world is and how bad people are. It’s important to stay informed on events, but I think it’s just as important to see the good things people are doing and the positive stories too. So that is the newest project and I will post the first video tomorrow around 6–that seems like a newsy time doesn’t it? I will always wear a plaid shirt because plaid makes me happy and I have a lot of them and we’re striving for good vibes here. To give you an idea of things I won’t be talking about, here is the backdrop to my very high tech news desk. 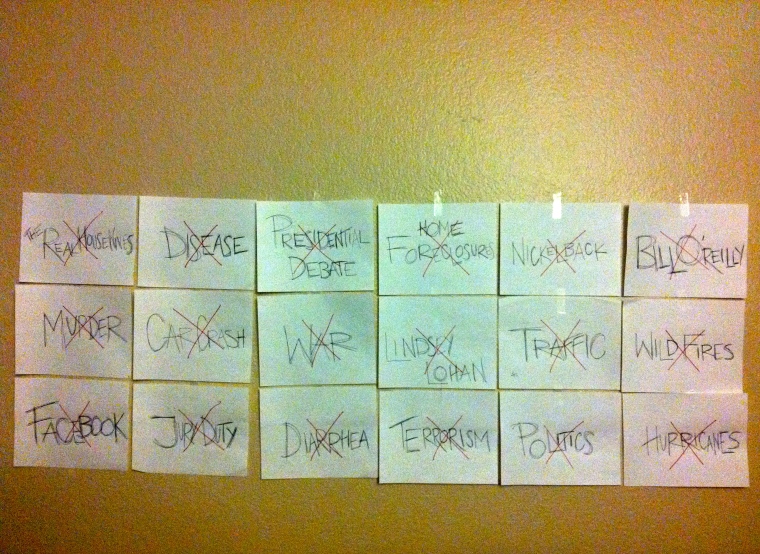 Watch the good news at goodnewsinplaid.wordpress.com.

**Addendum! I jumped the gun on my 6 o clock timeline. I’m a little behind. But the good news is now up at goodnewsinplaid@wordpress.com. If you have good news you’d like me to read on air, send it to goodnewsinplaid@gmail.com. It can be anything from your little league team won to you’ve been constipated for a week and maybe you finally had a bowel movement. If it’s good, it’s good.