OK, there’s a lot of crap in this piece that needs to be re-written or scrapped. Taking on a writing project in the midst of a heavy crash may have been a bad idea in terms of writings to share because than crap like this emerges and I told myself I’d stick to the rules. Even reading it now I can see how convoluted my mind way, how easy it was to stray off topic. I’ve begun to improve since Sunday, particularly cognitively, and the writing really does emulate what’s going on during fog. I had to cross some out because it just meandered and was so clunky and unclean, it was very far from conveying my ideas properly at all. Anyway, as uncomfortable as I feel posting writing I don’t like and probably 2/3 of which I would change, or burn, this was partially the point of the project. So just trust and let go. Besides, there’s like 11 people reading this. I think we’ll all be OK.

I feel this modern artwork both describes what it feels like in my brain recently and also represents the clustershit that my writing has been. At least spaghetti brain can look pretty. The writing is a mess. 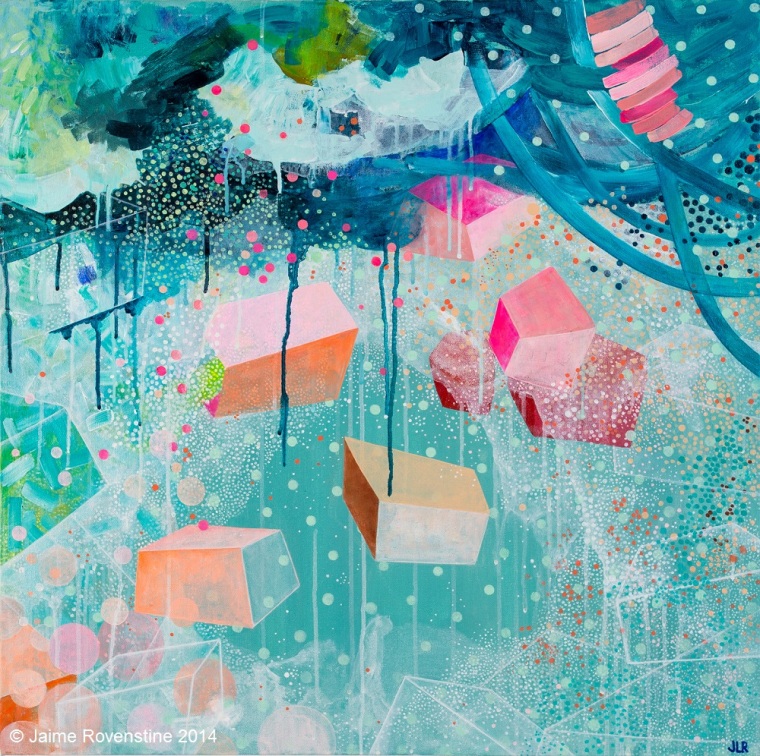 I say the as if it’s someone else’s. My writing. Me. I’m doing that thing where I start out simple, on course, paving a promising path toward something that makes me think but that I can also wrap up and understand in the end. There’s never a lull for words or ideas. They pour out–I have a lot of time to think them up. When I’m not writing them in my notebook or typing them on my phone I’m usually just thinking of nice sentences in my head. I’m mind-writing. Just watching sentences fall into place mentally, perfectly, and I actually feel relief when these sentences are formed. The kind of relief you feel when you  get in your car the first time after you’ve cleaned it, and it was dirty for a long time before. It happened on the way home from the pharmacy yesterday. Sadly, I remember the relief more than the sentences or ideas. I tell myself I’ll remember this later, but I hardly ever do. On rare and momentous occasions, if I just sit down and start to work it will pop out like a wine cork. Ah! There it is. But I hesitate to think how much has gone un written because I wasn’t near a pen or a computer, or that I actually was but just didn’t put the effort into getting it down. Owell. That’s kind of a self-important thought. And, I guess we have to assume the work we never made, lost now somewhere between sleep and consciousness, was probably crap.

The words pour out not because I’m FULL of words and ideas, but because I have no requirements. Few expectations, no deadlines. No assigned topics. And no financial incentive. It’s just a hobby that I treat like a job.  Except that I’d be fired by now and there’s no 401K. Maybe I have too much freedom, so the meandering and circling is just too easy to do. I struggle because it starts off clean, on track with a promising topic and flows naturally in one direction. Then somehow it turns into the literary version of a flying cockroach, darting around clumsily in different directions and you don’t know where it’s gonna land next and you know when it gets killed it will make a crunchy sound. Sorry scratch the last part. I don’t know what it is. I like the words and concepts emerging,they’re just not always in order. Or they’re crap.

I know this will sound incredulous to some, but when I’m in a crash my brain starts to stutter and cloud way more than usual. In the past I’ve mostly been able to avoid the cognitive effects at least when it came to my writing. But I’ve been working on this post since Thursday. I know I know, easy to blame shortcomings on the illness. But the only reason I feel it is effecting me this time is because that reading stutter returned on Friday too, having to reread sentences over and over, and then just not remembering an entire page and having to start over. Luckily I rested mostly on the couch while Monty quivered near me at the sound of America’s birth, and two friends brought me food! It was nice. Yesterday I was more clear headed reading wise, and able to finish my latest read, The Invention of Wings, which was really great. There’s a lot of good little nuggets in there. And I was surprised and inspired to learn in the authors note, the two main characters were real–born into money and a large plantation in South Carolina around 1830. They would eventually became devout abolitionists and publicly denounce slavery and fight for its end, sharing the cruelty they’d witnessed with their families own slaves publicly, and the world didn’t quite know what to do with them. I enjoy characters like that. It was enthralling and I recommend it.  I need a book club.I just feel like I’d never show up after the first meeting. Anyway my mom says she’ll read it so that’s cool.

Where were we? My writing going in circles, right. I wrote for three hours on Thursday and three hours on Friday and collapsed like a whale on to my couch after both “sessions” and sortof spent the weekend that way. Yesterday when I revisited the words,  I realized I’d written over 4,000 of them, and some made sense and others were in the wrong places and would just require a re-organization of things. But I don’t think my brain can handle it right now. I’m leaning towards spaghetti brain. Noooo. Here, I’ll find another pretty picture.

Also, I think this is why agents exist. Why good writers have agents. Proofreading! There’s a word I haven’t heard since college. Maybe that’s what this blog is, one long proof-reading session and one day it will turn into something else that actually pays dollars and cents and I can get an agent or whatever. Or maybe I just need a small person to stand beside me and ring a bell when I’ve written and rambled more than 10 minutes. Now I’m doing that thing where I write about writing. So dumb. I should just write and post. I’m too cautious. I just want it right and I know when it’s not. DING, the bell rings.

I’m going to condense and summarize the absurd amount of words resting on a white page behind this screen. Because I Believe in Brevity!! That sounds like something..a campaign slogan? Specificity is important too. I accomplished neither, so I’m just going to sum it all up. OK. It starts with this sentence.

“I think the time for a typewriter has come.”

Simple enough right? Then it drops off the edge. I find myself wondering if technology is aiding or prohibiting these things–writing, art, creativity and whatnot. Which somehow brings up the woes of scanning Facebook in the middle of the afternoon, and what those photos are actually capturing. I ask what it is about these photos that leaves me and others sad and yearning as we keep scrolling. (Authenticity, I think is the answer) Then I compare Facebook photos with those JC Penny photos a lot of us took in the 90’s, (dudes, the hair)  and explore physical momentos verses digital ones. Is my generation more or less authentic than the last one? Next I defend Millenials after continual insistence and wagging of the finger I encounter that says Millenials are all lazy, don’t know the value of hard work, we were given too much, have no accountability, and don’t appreciate what we have. This article is a great example which went viral a while ago and a few people posted it on Facebook like “Oh my God, so true.” Uhh, agree to disagree I guess. I agree that your point is false. Then, I deliver a personal conviction that it may not look like it, but I think as humans we actually are progressing, despite a lot of people my parents age saying the world is going to hell in a handbasket. I wonder if their parents said that too. And their parents parents. The fact is we’re still living among the good and evil that has always existed, which leads me to an exploration of that provocatively awesome question David Foster Wallace asked, which is, If we have all the things our parents never had and more, why aren’t we happy?

Then I wonder if is this a theme that has repeated itself throughout every generation. Always thinking the next one would surely have it easier. Each one working hard so the  generations after them might have what they never had, and do things they never did, and avoid the hardships that they had to endure. Maybe it’s hard to see that the world is still what it is, and human beings are still who they are, imperfect, after you’ve worked so hard to make it better. Especially if you worked your whole life to do it.

Maybe our notion of happy is off. Or maybe it’s not about happiness. It’s moving forward.

Then the neighbors fireworks got really loud and Monty was quivering below the desk and the writing turned weirdly patriotic. Fast forward from notions of happy and the formulas that work or don’t work, and also the American Dream. Achieving what we’ve historically called the American Dream does not mean achieving happiness. It means achievement. The happiness part is on us. The Dream is living in a country where we’re free to pursue that happiness pretty much any way we want. And I know it’s cheesy, but when you compare this country and our opportunities and freedoms compared to so many other places, we are danged lucky to be born into this one, with autonomy, opportunity and Chronic Fatigue Syndrome! Kidding. I think I have a very good life. I think a lot of people have very good lives and don’t even see it. Anyway this is the part of America that I’ll always be grateful for and humbled by, knowing the generations before me and the blood and sweat and tears that went into creating it, and I guess our job is to make their work and sacrifices worth it. I’m trying! I can’t say whether we’re a happier generation, I don’t know. But I think maybe the more important question is, Are we a more conscious generation? And to that I say, yes.